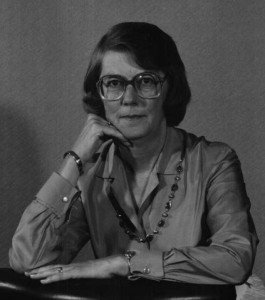 Rene (as she was known to her friends) was born on Tyneside, NE England but moved to South Devon with her parents at the age of 10. She trained as a teacher, specialising in history. Her research led to countless articles on history, travel, social customs, and short stories appearing in a wide variety of newspapers and magazines at home and abroad. After receiving over 100 rejection slips, her first novel, ‘PHYLLIDA’, was published in 1976. A steady stream of books followed, which she fitted in between looking after her husband and two daughters, becoming a founder member of Brixham Writers’ Circle, a member of The Romantic Novelists’ Association, Librarian of Brixham Museum, and Reader for the South West Arts.

Rene enjoyed meeting readers and writers in all genre, fiction and non-fiction. She gave talks at various writers’ schools and clubs across the country, often acting as an awards adjudicator for competitions throughout SW England.

Until her death in June 1993 Rene had written 20 fiction titles and 1 non-fiction. These have generated 47 reprints, 28 of them being issued posthumously. Her Devon trilogy, TO DREAM AGAIN, A SAFE HAVEN and DAUGHTER OF THE RIVER, her last novels, were re-issued in paperback in 2000 by Caxton Group Publishing, 20 Bloomsbury Street, London WC1B 3QA, and were digitally published in 2018 by Canelo Digital Publishing.

When Mercy Seaton meets Peter Lisburne at the annual Torquay regatta she regards him as a rich boy toying with a poor girl. But she likes him, and he genuinely likes her. In the sweet young laundress Peter finds an escape from his mother’s cloying world of social obligations. Before long he had
swept Mercy into marriage and a life of luxury at which her enigmatic grandmother’s far-fetched tales of past wealth had only hinted.

Mercy soon realises she cannot force her husband’s friends into accepting her. Despite her discomfort in the drawing-rooms of Edwardian society she is beginning to win friends of her own. One in particular looks set to change the course of her life for ever. When the Great War intervenes and the Depression in its aftermath, the Lisburnes’ fortune is virtually wiped out. Great sacrifices are to be made if the family are to remain in England,
and it is at this point Mercy has a dream, founded in reality, which might just solve all their problems…

Hardly out of childhood, Amy Kennedy, and fellow orphans Seth, Jay and Daisy are sent from the Lambeth Workhouse in London to the Devon port of Brixham to be taken into service, the girls as maidservants, the boys as apprentices on a trawler. Although her initiation into her job is hard, Amy quickly finds her feet, and shortly her horizons are brightened by an attentive young man, Daniel Newton, the son of a prosperous sea captain. The others fare less well; Daisy is clearly miserable in her work and, despite Jed’s protection, dreamy Seth founders in the harsh realities of a fisherman’s life.

As time passes Mercy grows very worried about Daisy who, swearing her friend to secrecy, finally confides that she is the powerless victim of her employer’s sexual abuse. Then the tragedy Amy had feared might happen becomes reality – a tragedy which is to have far-reaching repercussions, not only on Daisy, but on Seth, Jed and Amy herself…

DAUGHTER OF THE RIVER (published March 2000)

Pretty Maddy Shillabeer had long resigned herself to the fact that her clot in life was to care for her widowed father and her hard-living, troublesome brothers. In any case, were she to marry she would have hardly any choice of suitors since the number of eligible men was limited. One in particular,
Cal Whitcomb, a kinsman of hers, could never be considered, as his family, according to her father, had appropriated the rich Devon land that was rightfully theirs; instead of farming the Shillabeers had had to turn to salmon fishing on the River Dart, and they carried a grudge against the Whitcombs for it ever since.

One day a new arrival appears at Duncannon – Patrick Howard, who finds employment as a pot-boy in an inn at nearby Stoke Gabriel. Soon he has supplanted the ancient Henry Beer as the village fiddler and leader of the church band. And, to the great consternation of her brothers, he has charmed his way into their Maddy’s heart…

HISTORICAL ROMANCE under the pseudonym

NON-FICTION under own name IRENE NORTHAN

If you require any further information on Irene Northan or her works,
please contact us.