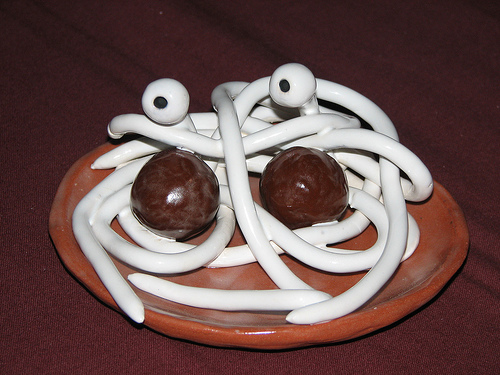 I attended Exeter University DebSoc debate on “this house believes in god” on Friday night. Amongst other arguments one combination of statements by the Doctor of Theology present struck me as curious. He scoffed at the power of science to prove the efficacy of prayer, and later claimed that a friend of a friend was healed miraculously from cancer. It is a combination of views I’ve seen before, and I believe it presents an interesting avenue for religious Apologists to explore.

The science of late stage cancer is stupendously well funded and extensively researched. Thus research exists allowing us to say the religious find comfort from their beliefs during, and even report less pain in, late stage cancer than non-believers, but the science doesn’t show improved survival.

(The science does show the religious get cancer less often, although it turns out to matter less what god or gods you believe in, but more how hard your religion is on alcohol, tobacco, promiscuous sex, and other known causes of cancer. Another lesson Christoper Hitchins may have shared with us).

This leads to an apparent contradiction. If miracles of prayer occur for believers of a particular theologian’s persuasion, but the survival rates are identical, then how can this apparent inconsistency by resolved?

Spontaneous recovery from late stage cancers might be an entirely natural (if rare) event, and thus occurs evenly or nearly so, and people merely misattribute it to whatever thing they tried last, or most hopefully.

This argument is clear, concise, and fits with the well known phenomenon of “attribution bias” which explains belief in a whole load of other medically related “woo” like homeopathy and acupuncture. Okay it is the boring view most rationalists would argue for.

Diety, deities or the Flying Spaghetti monster could be muddling with our perception of the world, or our science, making it impossible to subsequently measure or report his noodle-ly interventions. At this point further rational enquiry is logically futile.

The simplest apologetic is that the deity(-ies) merely removes the spontaneous remission that would occur in one of their other followers. So one follower asks for more time, another loses theirs, this makes the statistics add up but seems a bit harsh. Fits with the bloody mindedness of the god in the Hebrew Bible.

My favoured solution is that the deity(-ies) in question merely saves infidels, apostates and unbelievers in proportion to the numbers following their respective belief systems (as recorded in their medical records). It would require a bit of accounting finesse, but nothing to challenge an omnipotent being, and is compassionate (if we ignore the fate of those not saved, and the logical complexities of saving someone from entering a better place if their religion has one of those). The consequence of this, is that the fewer believers there are in the one true religion, the more people of other faiths, and none, the deity(-ies) has to save in order to keep the accounting correct.

No one present mentioned that a god who can intervene in such a manner answers the Riddle of Epicurus (presented earlier in the evening). The Theologian clearly believes god is “able but not willing” to cure cancer in others, and thus his deity is malevolent.

The power of modern science to detect even small changes in the world is miraculous.