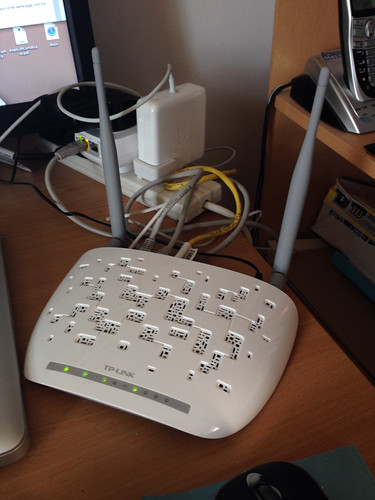 I have put off buying a new router for a long time, no desire to add to the increasing pile of electronic junk. The previous one was purchased when ADSL eventually arrived in Woodbury Salterton, and still works, so why upgrade?

The NetGear WAG354G didn’t support the latest wireless encryption (WPA2), and it doesn’t support IPv6. More crucially the ADSL is now faster than the 6Mbps the old 802.11g gives at best, and there are now 5 wireless devices regularly using the connection. NetGear also haven’t released any firmware updates for the old device for years, and my ADSL connection has been a bit flaky of late suggesting possibly failing hardware so I decided the time had come.

Had to change the default settings for Wireless Encryption. The setting screen says “For network security, it is strongly recommended to enable wireless security and use WPA2-PSK AES encryption.” (sound advice) but it defaults to using either WPA or WPA2, I selected WPA2 and AES explicitly, and disabled WPS. You probably want to do this too, but it is all geek speak to most folk, and having been through ADSL modem set up today I agree it is still too hard (some ISPs ship a pre-configured router – a good idea). Similarly in set-up the PnP feature is enabled by default, a technology I’m in two minds over, it makes things work more easily at some cost in security.

Being a geek I had to set it to use my randomly selected bit of 10.0.0.0/8 in case my home network ever subsumed into an IPv4 collective of some sort. Created a guest WIFI network, fiddled with rate limiting, set port forwarding up for SSH to my Linux box, and generally fiddled the way geeks will with anything like this.

Noted that if you upload the ZIP file for the firmware, rather than unpacking, and uploading the “.bin” file, it recognises it as the wrong file but still reboots.

Set-up and management is all over HTTP, not HTTPS. I understand the compromise here (avoids weird browser errors, or the need for a valid key and certificate in a device that is shipped), but it does mean that password for admin is on the wire in plain text.

Too early to say much on reliability, but first thing I discovered whilst wiring the router in is the ethernet cable supplied with the Vodafone SureSignal box is dodgy, and appears to be really poor quality cable in the first place, setting it up again the SureSignal box noted a fault, and replacing the cable with one supplied with the router removed the fault. So I suspect this is likely the route of a number of problems I’ve experience recently, and possibly a source of radio interference.

So far the TP-Link N300 TD-W8968 V2 seems a good value product, with plenty of features. Basic set-up is about as easy as it can be with the need to customise ADSL settings for ISP and country, but enough bells and whistles to keep all but the most hardened network engineer happy fiddling if you delve in. No doubt tomorrow BT will announce fibre to the cabinet will arrive next month rather than the current indeterminate date in the future.